A worm farm processes organic wastes with the help of earthworms. By Volodymyr Rozum’s method such beds are created directly in the root zone of the plants, healing the soil and making it more fertile.

Volodymyr Rozum proposes to use local earthworms: unlike red California worms they are better adapted to our climate. Together with other creatures that live in the ground earthworms are the first link of the food chain. That’s why their presence positively influences in the end the ecosystem of the whole planet making it suitable for people.

Warm Rozum beds are created in V shaped ditches and are filled with organic wastes 30-35 cm deep. It reproduces the forest floor and creates favorable conditions for the fresh air to penetrate to the deep layers of the ground and thus for the aerobic microorganisms and fungi to develop, nourish and enrich the soil.

Due to the joint work of bacteria, fungi and earthworms a lot of nutrients and natural bioactive substances are produced in the layer of soil rich in oxygen. And that furthers a quick development of plants in a healthy environment. The fertile layer of the soil is improved wholly and the semi-decomposed organic wastes become a nutrient substance for cultivated plants.

In the process of decomposing of organic wasted the warm Rozum beds become warm and damp, saturated with fresh air. Thus the best conditions are created for the existence and development of microorganisms, fungi and earthworms beneficial for the soil, as well as for the growth and nutrition of the plants.

The creation of warm Rozum beds is recommended in vegetable and fruit gardens even where there is a considerable layer of black soil: they will compensate the nutrients that the crop takes away from the earth. With warm Rozum beds the fertility of the soil will increase every year. 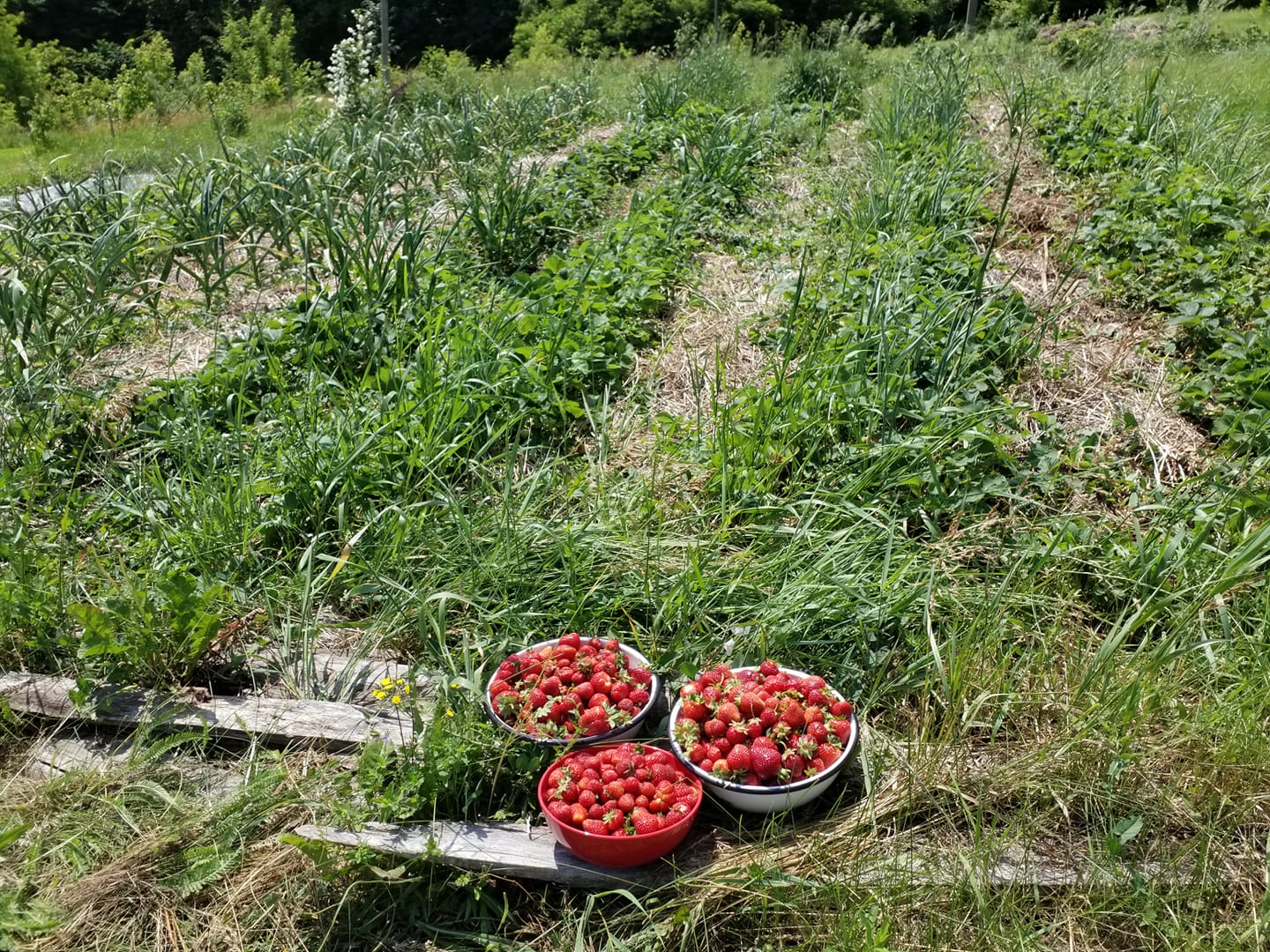 MYCORRHIZA: USEFUL PHENOMENON THAT APPEARS DUE TO ORGANIC MATTER

Thus mycorrhiza gives to the plants thousand times more water and nutrients compared to planting into ordinary soil where such phenomenon does not develop because of the lack of organic matter.

It is also experimentally proved that in mycorrhiza zone the number of beneficial for the soil bacteria increases twice and of some species (e.g. actinomycetales) ten times. At the same time the development of harmful bacteria decreases considerably.
Special ‘paths’ in warm Rozum beds allow a constant movement of organic matter and microorganisms proceeding it. The organic wastes sink in the process of decomposing, transforming itself into a market of nutrients for living organisms, plants, fungi.

While spreading, mycorrhiza pierces organic matter as a vascular system, transporting nutrients to the plant roots. Settling in all the volume of organic waste, mycorrhiza connects at once to all the plants growing on the beds and transports to them water, nutrients and minerals. The plants reciprocally share with fungus mycelium sugars that the last don’t produce but eat. In that way mycorrhiza fulfills the function of a vascular system by uniting all the plants and fungi of a plot of land into a single organism.

With the help of mycorrhiza more strong plants support weaker plants with useful mineral substances and they exchange other substances. In nature, the network of root plants and mycorrhiza unite the ecosystem into a big community, for instance a forest, where grasses, bushes, trees and mushrooms grow as a single organism and feel well.

The tender vascular system of cobweb like mycorrhiza is easily damaged. Its integrity is broken if we walk on ‘organic paths’. Together with mycorrhiza plant roots are also damaged, useful connections are broken, the exchange of water and nutrients between fungi and plants is ruined. Plants and roots spend much time and resources to restore these connections. And the growth of above-ground part of the plants is slowed down.

In general, with warm Rozum beds, caring for plants needs much less time and attention than in traditional plant cultivation. 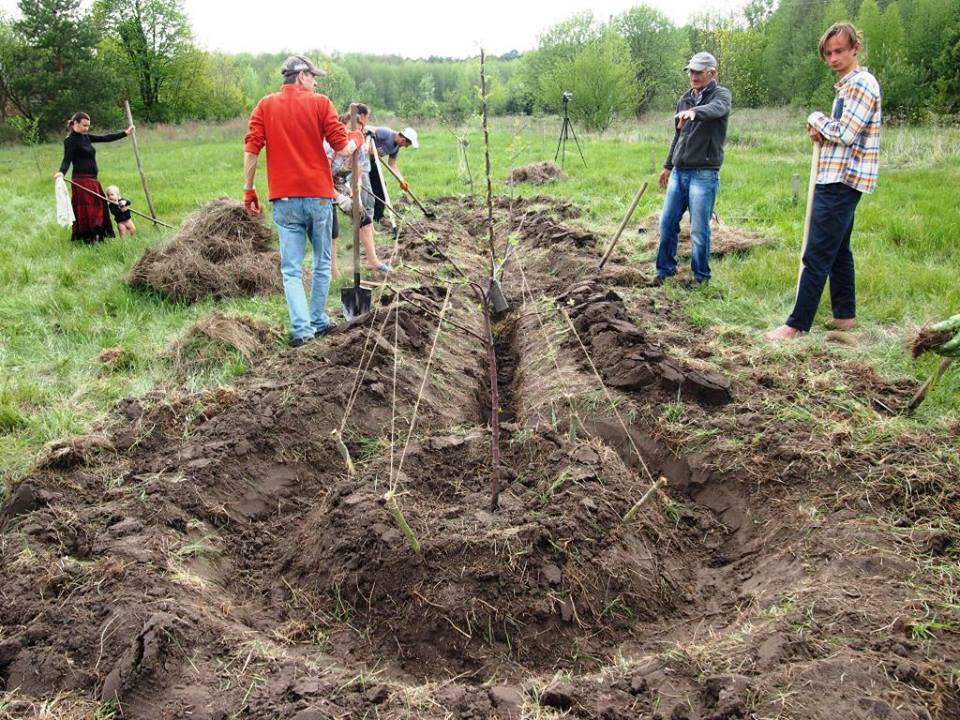 There is one more way to increase the yield of cultivated plants – the method of a famous agronomist Ivan Ovsinsky. He proposed dense planting of plants in narrow productive strips of 30-35 cm. Ovsinsky proposes to grow in that way allelopathic crops, those who have ability to oppress the growth and development of other plants. In that way chosen crops get enough light, water and nutrients for their development and won’t suffer from weeds’ influence.

Ovsinsky experiments proved that the width of 30-35 cm is optimal for dense planting. When we combine such strips with warm Rozum beds, each plant can easily reach with its root a place free of other plants close to the productive strip and take maximum nutrients from organic wastes without hindering other plants. Thus there is no concurrence between plants: each one is provided with enough water, nutrients and light that comes from the side part free of plants.
In such conditions the yield from the parcel is twice or more bigger than the yield from traditional parcels. And what’s more, this yield is ecologically clean as no chemical fertilizers are used in its growing, only organic wastes.

A well-known edge effect is also revealed in such conditions when the plant uses the potential of free space next to it and according to the words of Ovsinsky it forms “a heavy full grain in hope that it will fall nearby onto the free of plants place”. That means that it gives a bigger yield hoping that its grains will go to the strip free of plants where there is enough free space.
In a wider productive stripe plants begin to compete for nutrients and light as they shade one another. As a result all the competitors loose and the yield of the parcel is decreased. It is recommended to widen productive strips only if we grow allelopathically compatible crops, those who don’t oppress the growth and development of one another and don’t compete for nutrients.

Warm Rozum beds are a wonderful place for growing organic saplings. They fully provide the saplings with nutrients, vitamins and growth stimulators. The beds give to the saplings ‘spa’ conditions: there is an excess of warmth and water, enough of fresh air and light.

Thus warm Rozum beds are an ideal nursery for growing saplings of fruit and ornamental trees and bushes. In such conditions the saplings feel well, develop quickly and easily take root in a new place. Plants that were grown with organic matter feel less stress when being transplanted and transported, grow quickly, stay healthy and almost don’t know pest attacks and give a big yield as a result.

Unlike organic saplings, plants that were grown with chemical fertilizers support the stress less well, have difficulty to take root in a new place and suffer from pest attacks, that’s why they don’t keep up with organic saplings in development. The yield from such plants is always smaller. 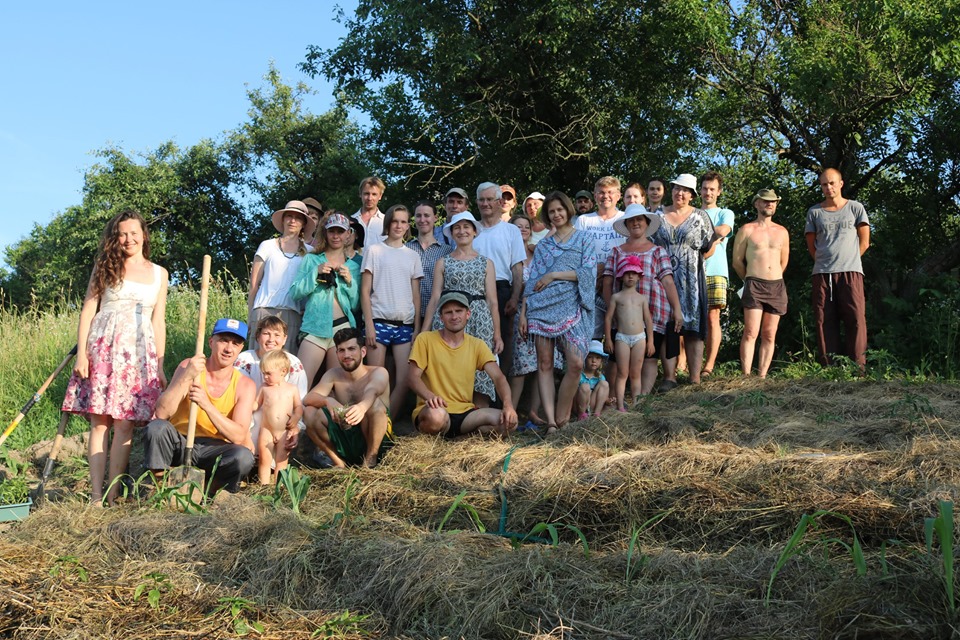 Organic wastes of any kind as well as weeds and sick plants that grew nearby become the base for nutrition in organic beds. These wastes should not be burnt or taken to the dump: they are being decomposed in ditches and become the source of healthy and restored soil.

Thus every year the black soil on the plots of land is enriched more and more due to the processing of different organic wastes, at the same time with growing at this place ecologically clean vegetables and fruit. Organic wastes allow also to grow ornamental plants for decoration of the environment.

The time for creating such beds and planting plants on them is spring. Take into consideration that apart from filling the beds with organic wastes you should add there useful microorganisms and bio preparations for healing the soil, if needed also earthworms.

The beds and plants on productive strips should be generously mulched, that means that the soil should be covered with cut grass, hay, straw, sawdust, pine needles, bark or leaves. Such method allows to create greenhouse effect when during the decomposing of organic matter the earth becomes warmer and retains water; it helps to prevent the soil from overheating or freezing, decreases the growth of weeds, improves water absorption during watering and protects the soil from evaporation, thus lowers the need in watering itself. In addition, mulching decreases the weathering of the soil and keeps its looseness and saturation with fresh air.
You should protect your plants with bio preparations preventing diseases and pests. Drip irrigation on raised productive strips will make the care of the beds easier and mulching will allow to retain water in the soil for a long time after watering. It will improve the growth and development of the plants during dry summer months. 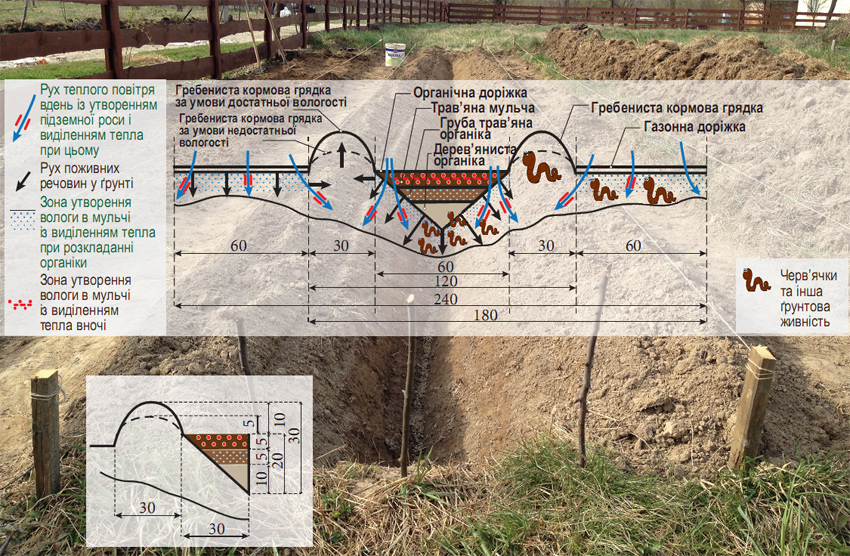 It’s a good idea to take care of such plants together with all your family, especially with children, with your friends and neighbors. You can exchange experience with them, share your discoveries and experiment results, observe together the beds in different conditions. This will help to avoid mistakes and develop together the most effective way that will take into account the specifics of local climate and soil.
Warm Rozum beds are good to be created in your vegetable garden. To make them you can use hand work as well as mechanical work – use motor cultivators and ploughs.
This method is efficient on big plots of land. This allows to grow organic vegetables, fruit trees, vineyards, forest belts, warm zones and at the same time to make the earth more healthy and to increase its fertility without chemical fertilizers, to keep the environment ecologically clean.

In that way we can create the best conditions for people’s living and bring up children on the principles of understanding of nature phenomena and wise coexistence with nature respecting its rules. Easiness of work on warm Rozum beds allows to involve children and elder people that unites the family, creates common interests and subjects to discuss the results. In such a project everyone will see its place and measure the importance of its role and its influence on the general work and the environment. 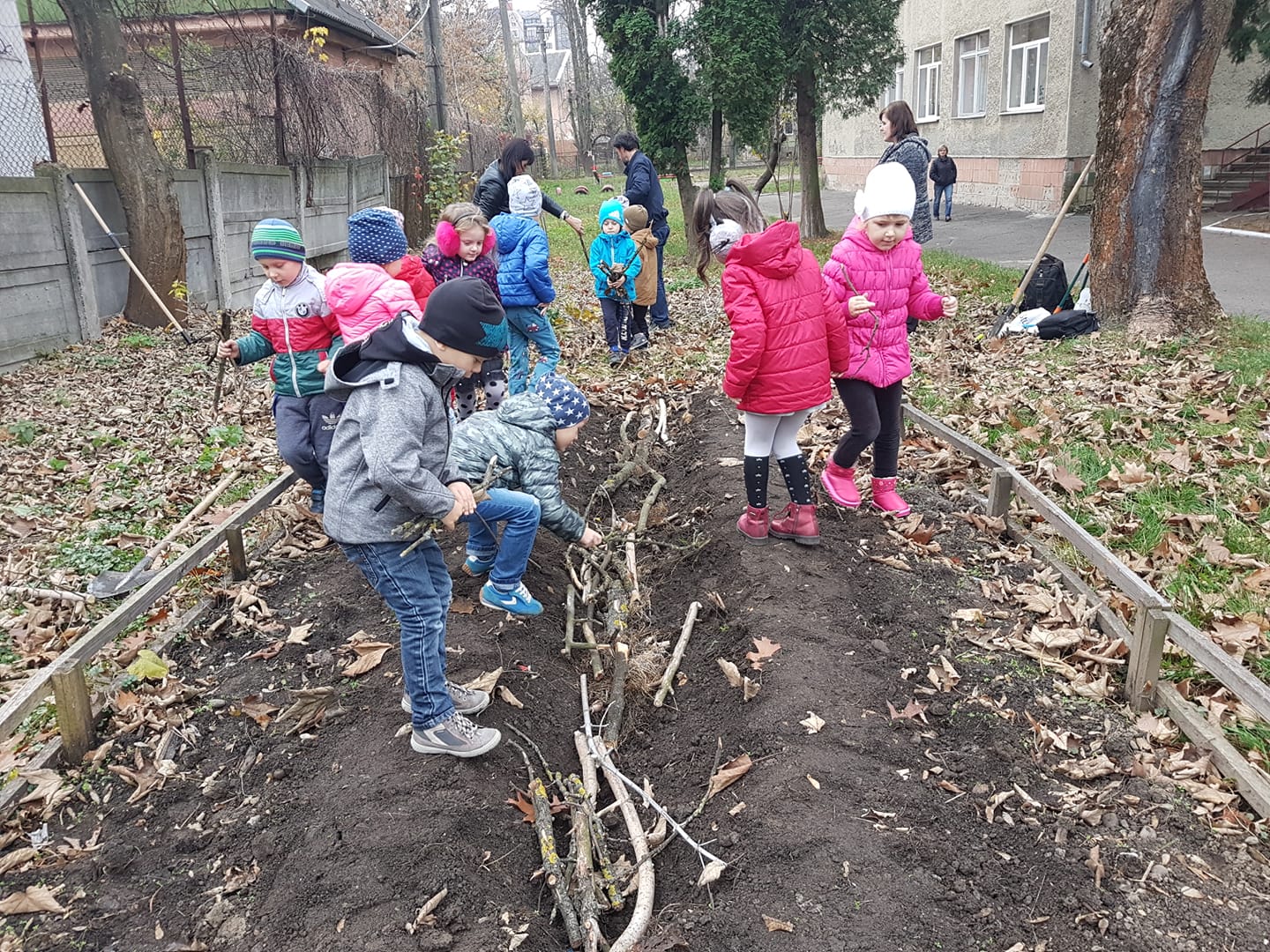